The Series II XKE E-type lost the triple SU carburetors in favor of twin Stromberg 175 CD2SE carbs. The Strombergs were carefully tuned to decrease emissions and meet US air quality standards. This resulted in a loss of horsepower, but a cleaner running vehicle. Clean running was also helped by heating the intake air-gas mixture using heat from the cooling system. Being in Southern California and knowing how real the problems of air pollution can be I have opted to keep the original Strombergs. The intake manifold plumbing – be it on a 3 SU carb set-up or on a Stromberg set-up is one of the coolest under the hood features on the E-types. In the case of my car the whole thing was dirty and the front Stromberg was clearly in need of a rebuild as a small amount of raw gas was pouring from the thing when the car was running.

Original condition of carbs and manifold after air cleaner removed.

I took off the air cleaner assembly and removed the carbs from the car for rebuilding. At the same time I wanted to refinish the air cleaner in an original hammered silver finish and also tackle refinishing the oil filter canister in a hammered green metallic.  Many people shift over to a modern spin-on oil filter at this point. I can see no reason why not to do this, but I thought I would keep the car as original as possible.

Beneath scratches, stains and minor surface rust, the air cleaner was in really excellent shape, I sanded and repainted in a hammered silver. I think it is close, but not exactly the same as the original. It looks pretty decent though. I found a pretty much exact match for the green metallic finish on the oil filter canister and was glad how that turned out. At the same time that I had all this area opened up I replaced the external oil hose that runs from the filter unit into the oil pan. 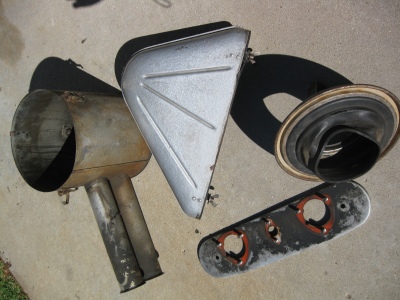 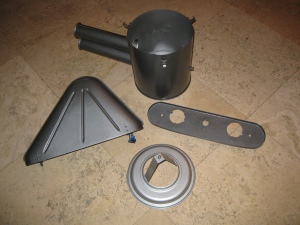 As for the carbs – as they have very tight tolerances and are not as adjustable as the SU’s I decided to send them out for a professional rebuild.  I sent them to Chester Gillings at 604 Spruce St. Pueblo, Co 81004
(719)647-0028  (www.sucarbs.com). Check out his site. He does fantastic work on SU and Stromberg carbs. The units came back completely rebuilt and looking brand new. The price was really reasonable in my book. While the carbs were off I applied lots of elbow grease cleaning and polishing the intake manifold and heating plumbing. I was very pleased at how nicely this all came out. Have a look! 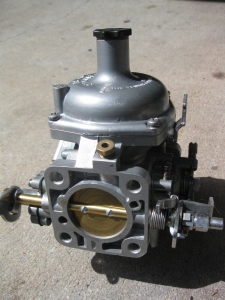 Jaguar XKE E-type intake manifold in process of being cleaned up.