The Jaguar XKE / E-type has an electronic SU fuel pump typical of many British cars of the 1950’s-70’s.  These pumps are simple devices that work on a set of points that activate an electromagnetic field and cause a rubber diaphragm to move and pump the fuel. They are low pressure, relatively robust and can go for long periods of time.  Problems typically include worn points and electromagnetic apparatus, failed gaskets and perished diaphragms.  The ethanol content in modern fuels is thought to be destructive to the older rubber diaphragms.  New ethanol-resistant diaphragms are available as are solid state SU pumps that recreate the look and function of the originals, but without mechanical points.  It is debated whether the old points-based systems are better because you can replace worn points, but when a solid state circuit fails you are stuck.

Failure of the SU pump on an E-type Jaguar can be detected in a couple of ways. First if you turn on the ignition, do not hear an initial set of clicks from the pump as it supplies fuel to the carb bowls and you have no fuel coming to the glass filter bowl you can suspect the pump.  In this case sometimes a sharp tap on the pump body with a spanner or small hammer will free it up and get it working for limp-home use.  Be careful though – it is quite likely the pump will fail quickly while you are driving, the car will stall and the consequences can be deadly if this happens in traffic. Call a tow.

In other cases when the SU pump fails you will hear continuous clicking that does not cease. If you are driving the car it will stall.  You should shut the engine down immediately if the pump starts running on and on.  This can signal several potential problems. First, you have run out of gas and the pump will burn itself out sucking air.  Second, you have some blockage in your fuel line feeding the pump. Again, turn off the ignition.  Third, the rubber diaphragm may have perished and it no longer can move the fuel.  Shut the ignition off. Finally, and potentially most dangerously, you have a leak at the pump gasket or along the lines, filter or carbs and you are pouring fuel out somewhere.  Shut the car off at once and determine where the fuel is leaking.  This can be a huge fire hazard and potentially deadly.  Sometimes leaving the car laid up can allow the float activated valves in the SU carb fuel bowls to seize open and overfill the bowls.  The fuel will then pour out in the engine area.  In some cases though the gasket on the SU fuel pump will fail and in the case of a Jaguar E-type Series II the fuel will then be pouring out at the rear of the car where the pump is located.

The good thing is that on Series II E-types replacing the SU fuel pump is very straight forward and the pump itself is readily available and not too expensive.  You can rebuild the old points type pumps with new points, diaphragm and gaskets – but in terms of time versus cost it might be easier to buy a new unit. I am sure there is plenty of debate on how good the new replacement units are versus the original ones…. you decide. The 1965-1971 E-types use the AZX1307 SU Pump and that will set you back around $130 or so.

I had run my 2+2 on the pump it came with during the rebuild and early shake-down driving around the local area. I figured on replacing it as a matter of course.  I bought a new pump ready to install when I got around to it and certainly before any lengthy driving. Well, as luck would have it one day I went to start the car to move it in the shop and there was that continued clicking.  I shut it down, smelled fuel, looked at the carbs and saw no leakage, looked at the back of the car and saw a puddle. It was a gasket failure at the pump. It happened suddenly and lucky for me in the shop.

On my 2+2 the fuel pump is located behind a small panel along the side of the right rear storage area (looking at the car from the rear).  That it is mounted behind the trim panels towards the back of the car above the

spare tire well. The little oblong panel is removed by removing two chrome finishing screws.  This panel also gives access to the radio antenna by the way.  If you were going to replace that – now is the time.  Before proceeding make sure that you have disconnected the car’s battery and there is absolutely no other potential source or flame or spark around.  By the way, if the pump failure was signaled by fuel on you garage floor – push (do not start and drive) the car out and clean that up properly first.  I find removing the spare tire cover panel and the spare tire provides better access to the pump than just the little cover hole – and if gas has leaked in the fender well or tire compartment you want to clean

it out. You may get some fuel leakage down to under the car when you remove the connections – so you should put something to catch that. Now remove the chrome screws and take of the oblong panel to see the SU pump in all its glory.

The fuel pump is held by a metal mount and there are two banjo type connections that join the fuel pump to the line in and the line out.  There is also power and ground electrical connections.  Make sure to mark these all so that you do not mix them up when reinstalling the pump.  Once the banjo connections and electrical wires have been removed you can unbolt the pump mount and withdraw the pump and mount.  On my pump you could see the gasket that was leaking.  The next stage is to remove the pump from

its mount, place the new pump into the mount and reinstall.  There are aluminum crush-washers on the banjo connections. Make sure to replace these with new ones.  Once all is back in and the wires connected, but before replacing the spare tire and oblong cover plate, reconnect the battery and turn the ignition on to test the pump. It should click quite a few times to get fuel from tank to carbs and then quiet down.  You are ready to roll again.

Pumps can be rebuilt. In the case of my pump the holes for the screws that hold the brass cover on the aluminum body of the pump had worn and stripped over time and it was impossible to achieve a seal. So,  installing the new pump was definitely in order. 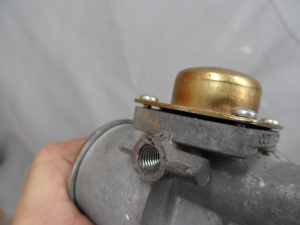