Mt friend Mark knew I was on the hunt for an XKE and told me about a car he heard about very close by in the San Fernando Valley section of Los Angeles. The car was a 1969 Series 2 Jaguar XKE with automatic transmission and air conditioning. The car was white with a black interior – both original. More or less exactly what I was looking for. However, the price seemed pretty steep. but I thought since it was quite close I would have a look. The car was advertised as just needing some cosmetic tidying up. When I arrived I met the very nice person selling the car and learned the vehicle was part of an estate and was being sold by the executor. The car had been owned by one couple since new and kept at the same house in southern California since it came home with them. The car had always been garaged. The car was used by the wife for local shopping on nice days and the couple would take an occasional weekend drive to Santa Barbara according to the executor. Sadly, they had passed away – the man some years before – but had treasured the car and kept it until the end. I took a look at the car and saw it needed a bit more than tidying up.

The car had been licensed up to a couple years ago, and had apparently been started and driven a bit regularly by a local service station owner for the elderly woman who owned the car. When she got too old to drive she had kept in licensed and running anyway. The last service was a replacement battery. As she got older she clearly had a little trouble with parking in the garage and the car has a scrape on the passenger side, a dent in the hood and a hit rear bumpers. Here and there was the odd door nick. The paint was very tired lets say…. The rear bumpers were pretty dented, the front was good. The rubber around the windows was pretty dry. The interior was near perfect except that the steering wheel had wood cracks and the varnish was flaking plus the leather on the two front seats was shot. The rear seat was essentially unused and the leather great. The big luggage area and floor were flawless.

The front seats on the other hand...

The odometer read 37,000 miles…and I would later learn from service records that was a true mileage.

Next came the big test – the search for rust…

To look for rust I went through the obvious Jag weak spots:

1. I looked under the battery, the sill fronts and where the front frame joins the monocoupe body. The bolt on battery box had some surface rust right under the plastic battery tray, but the rest was clean.

2. The flat panels under the buildplate on one side of the engine compartment and the fuel filter on the other were also clear of rust.

3. I pulled the spare and looked at the wheel well. Clean and white.

4. I pulled back the front drivers carpet and looked at firewall and front floor (from below car too) – Good.

5. I looked all around for any bubbles in the paint – particularly along rear wheel rims, sills and door bottoms.

6. Crawling around I poked around all the sills. They were clean and even had their original drain slits still open.

7. Around the gas filler cap there was a small amount of surface rust because the drain pipe was clogged. Scraping showed good metal.

8. From beneath the floors and bottom of monocoupe looked good. The bottom of the long snout was dented however.

9. The bottoms of the doors were also clear as was the metal around the windshield and hatch window.

Looking for rust on the Jaguar XKE

All in all it was the most rust-free unrestored XKE I had seen (in my humble price range). Thanks to loving owners – with a garage – and the southern California climate.

I took a look at the VIN numbers – which are found on the buildplate, the front frame and the window pillar – they were all the same and matches the paper work. The we tried to start the car – but the needle and a steady clicking fromthe fuel pump told us there was no gas… 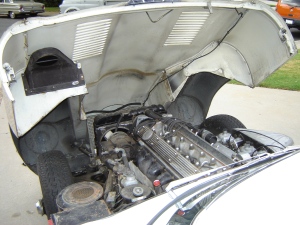 Now, I was not as concerned about the mechanicals as I was about rust, so I had a general conversation about price. The man seemed pretty firm – and I knew already that given the bodywork, chrome and likely replacement of hoses, belts, brake components, suspension bits and pieces, front seats, tires etc. the price was way out of line. The car needed much more than a tidying up. It was a light to medium restoration project – a promising one – but one that would cost some money. Also, since it was an estate sale it would require a little more time at the DMV to clear the paperwork. Here was an instance where a local sale woudl be easier because I could go to the DMV to make sure all was in order. Someone buying the same car remotely might not be as interested. In any case, I did some arithmetic on what all the various cost would be to put the car right and calculated a rough value – we were very far apart on price and I left… but for some reason I had a real desire to dig into this car and get it back to prime. Oh well… to be continued.