The rear suspension of the Jaguar XKE (E-type) was a marvel of engineering when developed and has become a popular item to drop into the construction of hot rods over the years. Aside from looking cool, the suspension provides in one solid unit 1. a limited slip  differential, 2. inboard disk brakes that reduced the unsprung weight and improved handling, 3. true independent rear suspension design with two half shafts and four u-joints supplying power to the wheels, 4. each half shaft and wheel assemblage dampened by two shocks and springs, 5. the ability to relatively easily drop the entire differential, brakes and suspension as one unit for servicing. Now, there are drawbacks to the design 1. it is relatively complex with lots of bearings and u-joints etc., 2. any real work on the brakes requires dropping the entire suspension to get access, 3. replacing the four springs and four shocks is time consuming – and must be done carefully as the units are under compression. If someone says that Jag you are thinking of buying ‘needs a little attention to the rear brakes’ – be prepared for a fair amount of adventure getting to the offending units.

Now, the first thing I tackled was getting the old exhaust out of the way. You have to remove the resonator-tail pipe assemblages to drop the rear suspension. As my exhaust was old, rusty and had numerous welded joints it was an easy choice to decide to replace the whole thing with a new stainless steel system. That being the case, I decided not to try and cut free the resonators, but to drop the entire exhaust from the manifold back to the mufflers and resonators as a unit. In theory this is relatively simple as the exhaust runs exposed along the bottom of the car and is held in place by a number of easy to access hangers.  I supported the exhaust and undid the hangers – which were all in good shape and unbolted with ease.  I then undid the nuts holding the exhaust pipes to the cast iron manifolds… and then things came to a halt. No matter what I did, or how hard I tugged or beat on the old exhaust, it would not come free from the manifolds. It was corroded solid. I decided the only sensible way to proceed was to cut the pipes below the manifolds and then take off the manifolds along with the remaining pipe ends.  I was going to replace the exhaust manifold gaskets anyway. Fortunately, the brass (bronze?)  nuts holding on the manifold came off with no problem and off came the manifold with the pipes still stuck in them.

I wanted to reuse the original manifolds despite the fact they were missing a bit of the ceramic coating. These things cost about $300 each – and I did not think it worth $600 to replace them. So, I really needed to get the pipes free  from the manifolds. No amount of twisting or beating would budge them. My son helpfully applied some heat to the manifolds while I worked them and eventually we were able to free the pipes. The whole rusty and butchered exhaust system was discarded. AN IMPORTANT TIP- Save the bands and associated hardware that holds the two mufflers together! It turns out that some of the exhaust replacement kits that you can buy do not include these bands. You must have these bands to hold the twin mufflers together and mount them to the car.

Heating the manifold to remove the old exhaust pipes. 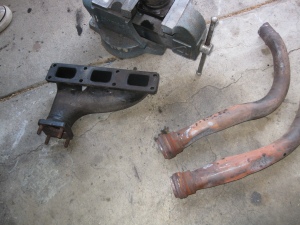